Only at the Jara Cimrman's table. 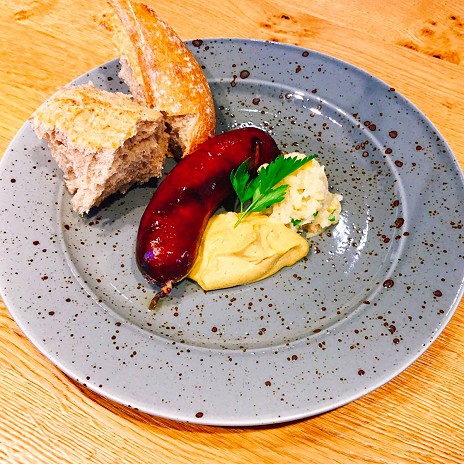 Who is Jára Cimrman?

Jára Cimrman is a universal Czech genius, created by Czech comedy writers, Jiří Šebánek and Zdeněk Svěrák. According to the narrative of Jára Cimrman Theatre, he was one of the greatest Czech playwrights, poets, musicians, teachers, travellers, philosophers, inventors, scientists, criminal investigators and athletes of his time.

Jára Cimrman was born in Vienna between 1869 and 1874. His father was Leopold Cimrman, a Czech tailor, and his mother was Marlen Jelinková, an Austrian actress.

According to the seminar The Messenger from Liptakov he died at the very beginning of the First World War, while the fictional village of Liptákov was Cimrman's home in his old age.

For a long time nothing was known about Cimrman's marriage, let alone about his children.

Cimrman was not married and consequently had no children, even though it is well known that even an unmarried man can easily have children. However, no such offspring can be found in the official records which means that we must use other methods.

The most reliable of these is to search for hereditary traits. But as far as Cimrman's physiognomy is concerned, not much evidence has been preserved. Cimrman, as you may know, had a strong dislike of close-up photography — only a few aerial photographs of him are available.

And so there is only one source to draw upon: the master's bust. From this, one characteristic detail is apparent: the particular shape of his side profile. There is an unusual bulge on the crown, called a "genius bump" in literature. So the task was set to find similar profiles among the population of the Liptákov area.